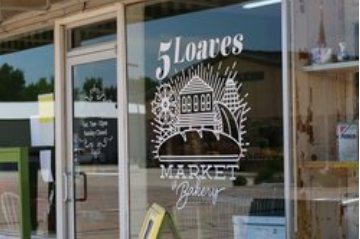 The doors to Shickley’s only grocery store closed late in 2016.

For the first time many residents could remember, there was an empty corner building downtown and trips out of town to buy milk.

Shickley mom Gladys Schlegel wanted to change that situation as much as anyone and let her son, Chris, in South Dakota, know it. “This is bad. We’re losing our store,” she told him in one phone call.

Then she planted a tiny seed of an idea. Why didn’t Chris and wife, Cassie, buy the store?

Chris is a product of Shickley, graduating in 1993. Still, he and Cassie were not the likeliest of candidates. They were young parents settled in Rapid City, SD, where Chris was in his 17th year as a physical therapist and Cassie’s new custom cake business was taking off.

That tiny seed took root, though. Maybe it was time to try something else. You know, a bakery business would fit pretty seamlessly with a grocery store. Risk can be good, right? (After all, they met on a blind date, and that turned out pretty well, Chris and Cassie joked.) In the end, the decision to upend every speck of their life came down to sons, Joshua, then 4, and Jacob, then 2.

“We knew we wanted to raise them in a small town, where we can have a say in how they are raised; have a say in the school system and community,” Chris said.

That is how they became grocery store owners and how small handprints began to dot the store’s front door. (Joshua and Jacob like to play doormen.) When they stepped foot inside the building in January of 2017, they saw a space that they could transform into a throwback of sorts to an old general store.

“We want it to be the opposite of Wal-Mart, where people feel comfortable coming in, shopping, hanging out. We want them to feel like this is their store and they matter,” Chris said. They placed a farmhouse-style table and chairs by the front window, where customers can read the newspaper and grab fresh coffee. Those customers came in long before there was anything to buy. Chris knew Shickley would support them, but still the extent surprised him.

Cassie, a western Colorado native, tries to count all the unexpected offers of help, but loses track. “Everyone just kept saying ‘We’re so appreciative of what you are doing. Let us know what we can do for you.”

A local man built them a potato bin. Another local resident built their sandwich bar. Many other residents volunteered to help stock their shelves. On March 13 they opened (officially.) (Not a grand opening or anything, Cassie pointed out. “We just opened the doors and survived.”)

The first days were special, they said, watching customers practically skip up to the front door. “They were almost giddy, like kids in a candy store, so happy to be able to grab what they need and get the majority of their stuff here without traveling,” Cassie said.

They have settled into an initial routine. Cassie arrives at 5 a.m. to make breakfast burritos from scratch and stock the bakery counter with doughnuts – both smash hits. A few latecomers are disappointed each day, when they find the burrito tray empty and the whipped-cream-filled long johns long gone. She also makes a lunch dish each weekday, to supplement the sandwich bar. Her cake business booms in Nebraska now, and with the upcoming addition of a convection oven, she’s planning to add French breads and other treats.

Chris and Cassie don’t deny the toll of long days or the learning curve ahead. But they have much to be thankful for, too, they point out: Like that good feeling when people walk in the door, check the coffee and make themselves at home.

The chance to renew old friendships.

The nearby grocery store owners who offered their help; and for Realtor Karla Jacobson of Fortify Group: “She helped us negotiate the purchase of the building. She went above and beyond what we expected a Realtor to do,” Chris said. Fortify Group co-owner Joe Kamler found the couple a commercial insurance policy to fit their services and walked them through it.

SpartanNash distributors stocked their store with scientific precision. And Gladys, who started it all, is there, too, making sure the produce looks good and their household runs smoothly as they get established.

When they get overwhelmed, it’s good to remember the meaning behind the store’s name “5 Loaves Market and Bakery,” based on the Biblical story of Jesus feeding 5,000. “We don’t have to feed 5,000. We just have to feed 350,” Chris said.